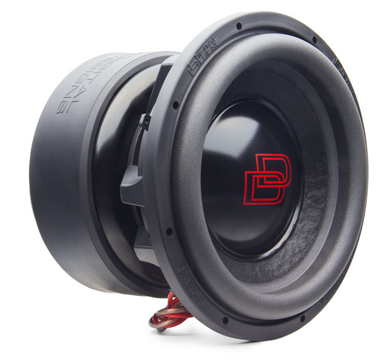 The 9900 Series woofers were developed  in response to the low frequency explosion in music, across all genres. These subwoofers were designed to provide long term power handling, with accuracy, and ultra-long excursion.

The 9900 motor is a beast, with 3 inches of magnet cross section area, a diameter over 10 inches, and weighs in at 70 pounds. The traditionally tight DD magnet gap drives long throw flat aluminum voice coils to a peak excursion in excess of 3 inches, while keeping enough turns in the magnetic gap to maintain power and control.

The Beauty of the Beast

The magnet gap uses a symmetric flux topology with a pole piece that is flush with the top plate, and undercut below the magnetic gap. Fixed to the top of the pole piece is a black anodized aluminum ring that does double duty as Faraday Ring and high efficiency heat sink.

The technology tour de force focus continues with the rest of the moving parts. The composite, multi-spider assembly is comprised of 5 layers consisting of 3 different materials heat formed into a linear, long wearing suspension designed to give years of service. The X-11 cone is made from the strongest synthetic pulp known to man and is non-pressed to expand the cross section area for increased rigidity. The 2 layer EROM surround maximizes cone area and travel while reducing moving mass.

For additional endurance we take a page from our competition SPL playbook and arm the 9900 with a reinforced triple joint. We do this by strengthening the former wall with a layer of fiberglass, and then we rope the coil which adds additional surface area to the glue beads above and below the spider.

The 9900 is the go to subwoofer for the demanding bassaholic with a profound interest in physics. Entertaining minds will revel in the endless system design possibilities deliverable with these precision low frequency devices.

The 9900 Series can be optioned out with composite cones, composite dustcaps, supercharging, suspension mods, and a multitude of logo options.
Please contact us by phone or email if you wish to know more about customising your woofer.

The DD multi-spider suspensions start with layers of fine weave cloth impregnated with thermal activated resin. These fine cloth sheets are then placed together with the weave grain at opposite angles, equalizing the inherent tension and increasing the strength. The layers are formed by heat and pressure until cured in molds with very high peaks and valleys. The two layers of fine cloth are far stronger than a single layer of heavier cloth, the higher surface area of the fine weave cloth gives more contact area for the resin. The high peaks and valleys, or corrugations, dramatically increase the strength over wide, shallow, progressive type rolls.

Two layers of laminated cloth are also more resistant to bending than a single layer. The layers are forced to bend along different section of their respective weaves, making the combined structure stronger and more resistant to fatigue.

DD then take these laminated layers and combine them for a given compliance target; most DD speakers will have 4 - 6 layers of cloth in the suspension.

These multiple layers of cloth formed in deep corrugations keep their inherent strength once the resin breaks down. The DD suspension retains restoring force to the cone after years and years of use. It does cost more to build mult-layered suspensions, but the benefits are many and long lasting.

DD developed the most electrically efficient connections, the Direct Connect, one of the latest DD innovations now being copied the world over. First off, multiple tinsel leads are twisted and soldered to copper power wire at the edge of the speaker frame. This twisted and soldered connection reduces any signal lost to an absolute minimum.

DD's 10 gauge power cable is made from Oxygen-Free copper. Copper provides perfect contact in contrast to speaker terminals or push-down spring connections which are made from low grade metal. Many of these "pretty" (but poorly made) terminals have 0.1-0.2 Ohms of resistance in just the terminal housing. If you don't believe us, unscrew one and watch it stick to the speaker magnet.

Another flaw of common speaker terminals is the inability to match up with large gauge speaker wire…And if one is able to find a terminal large enough to accept large gauge wire, it is still made from cheap metal thus the signal loss problem. DD's 10 gauge power wire Direct Connects can be twisted (the best mechanical connection possible) with any gauge wire, AND also be connected with ANY number of wires. Series and parallel connections can be done in any combination and WITHOUT signal loss.

DD suggests the use of wire nuts for direct wire to wire terminations. Twisted wire connections are the only code approved termination in building codes due to the no loss transfer ability and permanently held connection. These same wire nut terminals are the perfect connection for mobile audio connections.

Direct Connect allows virtually any gauge and number of speaker wires to be connected without signal loss.

The EROM profile, nearly parallel walls with a half-round top, is more self-supporting than the wide half-roll type surrounds. This enables the surround to become part of the suspension compliance, helping to control the high forces of the accelerating moving mass and enabling the coil to better track incoming signal.

The DD EROM profile innovation allows for more cone area, lower mass and increased stiffness. It's no wonder than the DD EROM has become the most copied surround in the world.

The dustcap and spiders of a speaker create changes in air pressure as the cone system moves up and down in accordance with the input signal, and the amount of movement is proportional to the amount of input signal.

The dustcap is used to push cooling air down through the pole piece.  The pole piece has cross ventilation passages machined from the center vent to the outside of the pole piece, with rows vent holes at the top and bottom of the pole.   Cooling air is pumped directly onto the aluminum former as well as drawing heated air out of the magnet cavity.

The voice coils are also part of the Free Flow Cooling System with rows of cooling vents located above the coil windings, below the coil windings and at the top of the former in the dustcap cavity.  Cooling air is pumped through these rows of holes to move heat away from the wire; as close as possible to the source of heat.

Another DD innovation was eliminating lead wire noise, breakage and suspension offset distortions with the introduction of our Laminated Lead Wire System. DD pioneered this development as increased speaker excursion exceeded the limits that stretched tinsel jumping across the frame to cone gap could accommodate. The longer lead lengths cause excessive slapping against the cone as well as setting up oscillation modes that fatigued the wire.

The Laminated Lead Wire System placed the tinsel leads between layers of the spiders, eliminating hanging wires to clang around between the spider and cone. The spiders and lead wires become an integral unit with the corrugations of the spiders engineered for the excursion demand of the speaker.

The DD system also allows for efficient handling of high current demand applications. Some DD woofers use 8 lead wires for every voice coil conductor, allowing even the most high power amplifiers to transfer power with minimal signal loss.

The cone is our multi-fiber synthetic blend, the type of construction used in the highest power handling concert drivers, not punched out from bleach bottle plastic. These special cones are designed for the highest strength with the lowest weight, again, lighter is louder and faster.

DD start with ultra-light weight synthetic fibers which are cut to varying lengths. These fibers are combined and mixed with high binding strength natural fibers and aerospace grade resins. High tensile binding increases the bond strength at the points where the fibers become interlocked.

The fibers are shot at the cone molds in angles which re-enforce the cone body perpendicular to the direction of the voice coil forces. This increases the resistance to bending modes at high power levels.

These high-tech fibers have incredible strength and are further enhanced by using techniques to increase the cone cross section area without adding additional mass. The resin used creates a hard outer skin on the cone surfaces, creating a sandwich construction format. One skin cannot bend without the other skin doing the same, the further these skins are moved apart, the higher the resistance to mutual bending becomes. The ratio of increased strength is exponential, twice the thickness results in 4 times more rigidity. The newest DD synthetic blend cones are state of the art in cone technology and an integral reason why their speakers can supply high SPL and low distortion.

This product hasn't received any reviews yet. Be the first to review this product!